Claudia knew that she could never pull off the old-fashioned kind of running away. That is, running away in the heat of anger with a knapsack on her back. She didn’t like discomfort; even picnics were untidy and inconvenient: all those insects and the sun melting the icing on the cupcakes. Therefore, she decided that her leaving home would not be just running from somewhere but would be running to somewhere. To a large place, a comfortable place, an indoor place, and preferably a beautiful place. And that’s why she decided upon the Metropolitan Museum of Art in New York City.
​
Over 50 years of The Book: The injustices of being the eldest sister, weekly chores and allowances, hot fudge sundaes, when kids could just get on a train and no one asked where their parents were. Imagine stowing away in a museum, hiding out in toilet stalls, sleeping in the historical exhibits, a mysterious angel statue, secrets in files . . .
​
​ 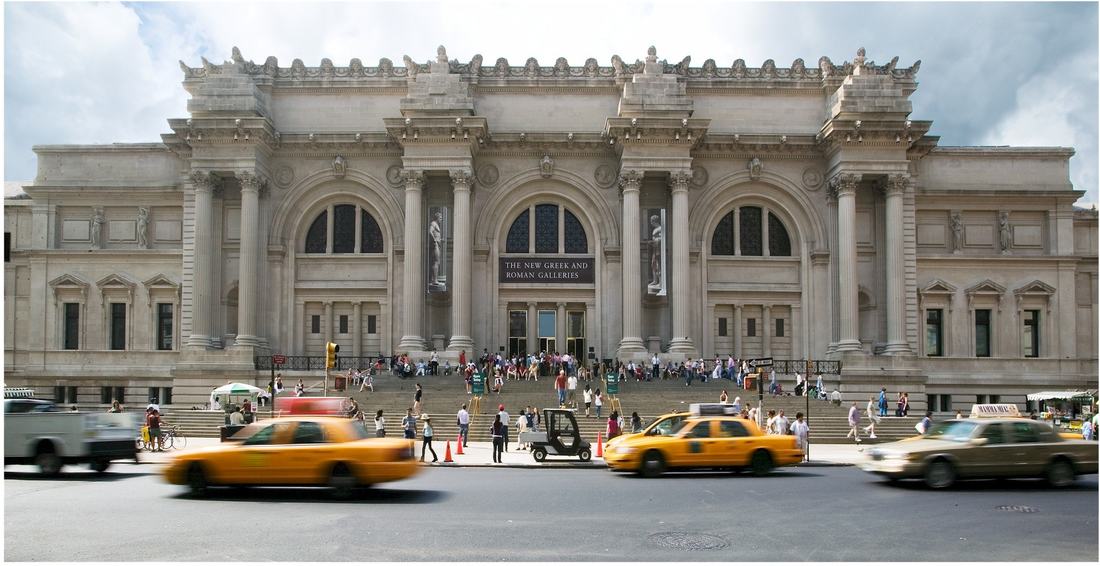 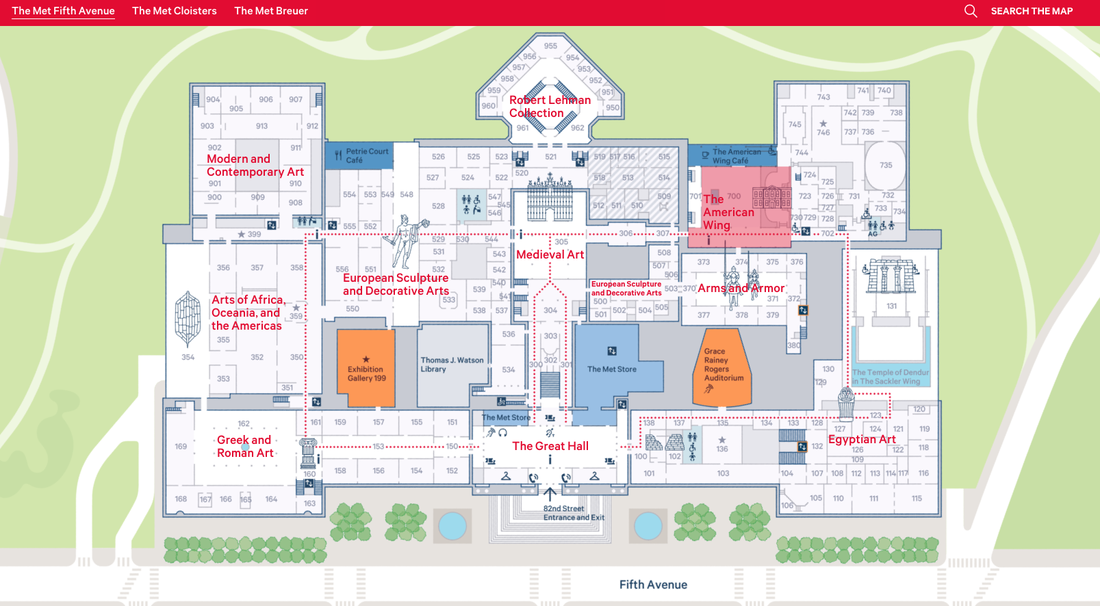 https://maps.metmuseum.org/galleries/fifth-ave/1/700
​"A map can make you want things, and a book can open a door--a door to the main staircase of the Metropolitan Museum of Art, which leads to a long hallway with a velvet rope, heading to an angel statue that might transform you."--Deb Caletti, Essential Maps for the Lost, 2016.
​ 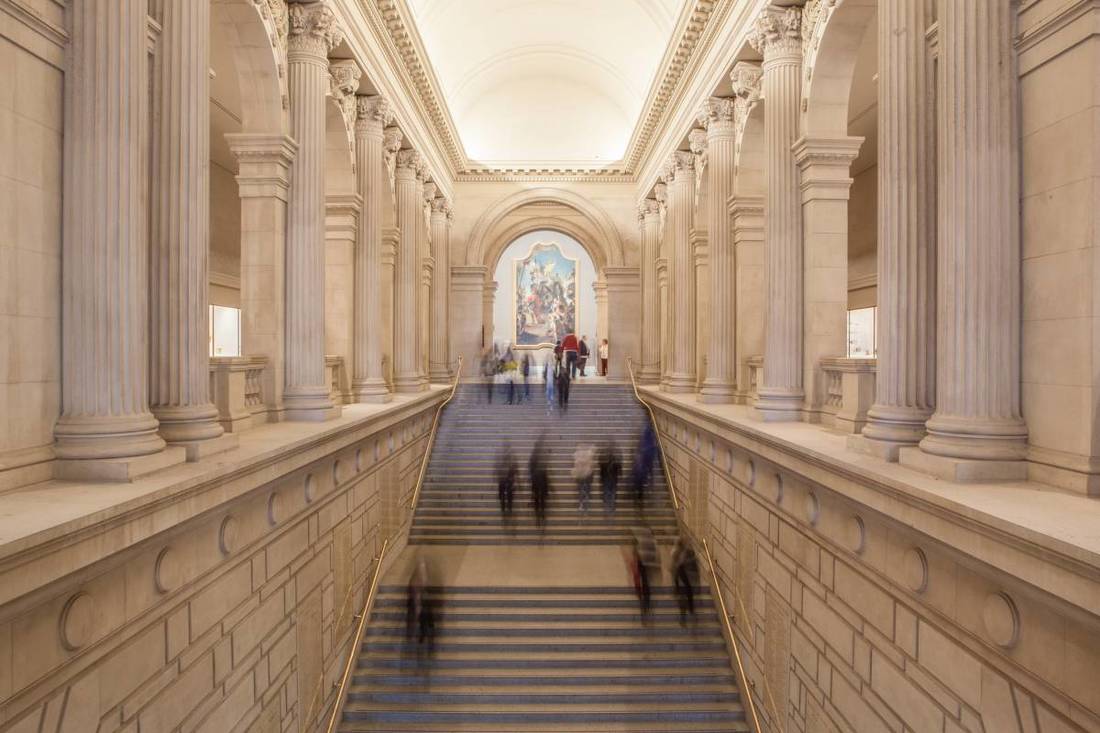 https://www.metmuseum.org/about-the-met/curatorial-departments/greek-and-roman-art
"Claudia hid her violin case in a sarcophagus that had no lid. It was well above eye level, and Jamie helped hoist her up so that she could reach it. It was a beautifully carved Roman marble sarcophagus. She hid her book bag behind a tapestry screen in the rooms of French furniture…. The trumpet case was hidden inside a huge urn and Jamie’s book bag was neatly tucked behind a drape that was behind a statue from the Middle Ages." —E.L. Konigsburg, From the Mixed-Up Files of Mrs. Basil E. Frankweiler​, 1967.
​ 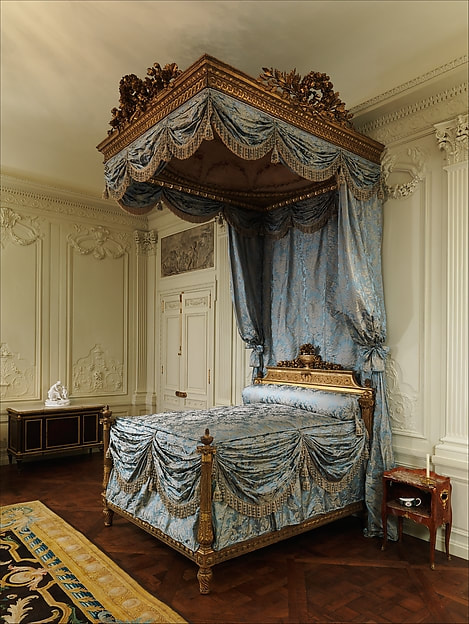 https://metmuseum.org/art/collection/search/231893
​"At last she found a bed that she considered perfectly wonderful, and she told Jamie that they would spend the night there. (I’m familiar with that bed, Saxonberg. It is as enormous and fussy as mine.) —E.L. Konigsburg, From the Mixed-Up Files of Mrs. Basil E. Frankweiler, 1967 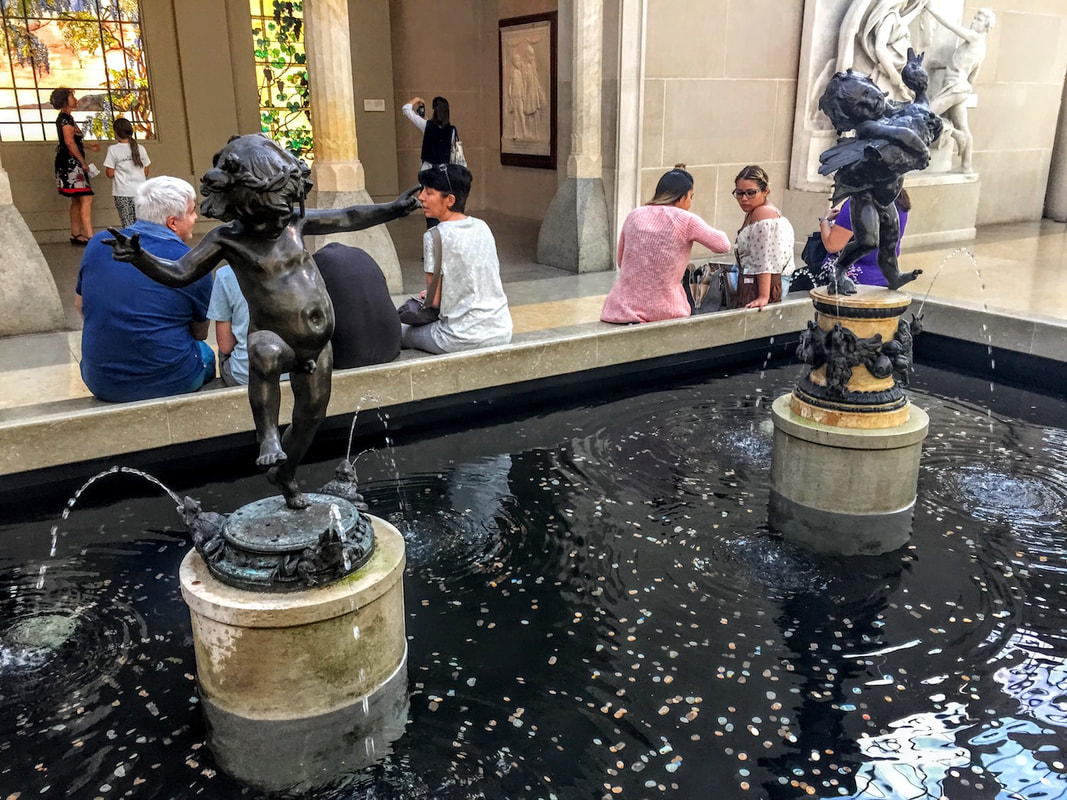 The True Story Behind
Mrs. Basil E. Frankweiler and Her Mixed-Up Files

A half-century ago, a girl and brother ran away to New York City from their suburban Connecticut home. And the Metropolitan Museum of Art hasn’t been the same since.
​

If visions of Claudia and Jamie bathing—and collecting lunch money—in the Met’s Fountain of Muses bring up fond childhood memories of your own, you’re among the legions of readers who grew up loving E.L. Konigsburg’s From the Mixed-Up Files of Mrs. Basil E. Frankweiler. The classic children’s book turns 50 in 2017, and the tale of the Kincaid siblings spending their days wandering about the paintings, sculptures and antiquities, and their nights sleeping in antique beds handcrafted for royalty, is as popular as ever. The 1968 Newbery Medal winner has never been out of print.

(The same year, her debut novel Jennifer, Hecate, Macbeth, William McKinley, and Me, Elizabeth received the Newbery runner-up honor; Konigsburg is the only author to ever achieve the dual literary feat.)

Elaine Lobl (E.L.) was born in Manhattan in 1930, but grew up in small-town Pennsylvania. She earned a degree in chemistry from the Carnegie Institute of Technology in Pittsburgh, and married industrial psychologist David Konigsburg in 1952. But a career in science wasn’t to be. She had trouble with the lab work; her son Paul says more than once, she blew the sink up—and lost her eyebrows—mixing the wrong elements.. So Elaine became a stay-at-home mother of three, and while living in Port Chester, New York, decided to start writing.

“When we were in grade school, Mom would write in the morning. When the three of us kids would come home for lunch, she would read what she wrote,” says Paul Konigsburg, 62. “If we laughed she kept it in. If not, she rewrote it.”


The Konigsburgs never lived in New York City, but the metropolis always provided a cultural respite. One institution in particular served as both babysitter and source of inspiration.


“Mom took art lessons in [the city] on Saturdays, so she would drop all three of us kids off at the Metropolitan,” says Paul. “I was the oldest, so I was in charge, and I had three rules: One, we had to see the mummy. Two, we had to see the knights in armor. And three, I didn’t care what we saw. Mom would meet up with us in the museum, take us to study Impressionist or Modern art. It always made me want to puke, but we did it every weekend for over a year.”


Konigsburg’s most famous work—she wrote 18 additional kid’s books—had multiple inspirations. In an “Author’s Message” published in a 2001 “Mixed-Up Files” issue of the Met’s Museum Kids magazine, Konigsburg recalled seeing a single piece of popcorn on a blue silk chair behind a velvet rope at the museum and musing that someone snuck in at night for a fancy snack. She also recalls an ill-fated family picnic at Yellowstone Park. As ants got all over the salami sandwiches, the sun melted the cupcake icing and her kids whined, and she realized if her brood ever ran away, they would have to land somewhere utterly civilized.


In October 1965, Konigsburg found a more specific inspiration—one that set the mystery at the heart of the book in motion. At the time, the New York art world was obsessed with the question of whether a sculpture purchased by the Met for $225 was actually a work by Leonardo da Vinci. (It is now believed to be a da Vinci from 1475.)

Konigsburg reimagined the statue as “Angel,” the could-be-a-Michelangelo that captures Claudia’s imagination and leads her to the mansion of the titular Mrs. Basil E. Frankweiler. As in real life, the fictional heiress purchased the statue for a few hundred bucks. And though Frankweiler—and her exchange of the truth about the statue for an account of the kids’ adventure in the museum—isn’t based on a real person, her desire for mystery and excitement rings true for anyone in search of an adventure of their own.


Konigsburg found her own Fountain of Muses in her kids, and many of her literary notions evolved out of how her three offspring experienced childhood. It took becoming a parent himself, before Paul realized “how the book helps young people navigate that struggle to be themselves and find their own niche.”


There’s a real-life Claudia, too—Konigsburg’s daughter Laurie. She modeled for her mother’s black-and-white illustrations, which were sketched from Polaroids taken inside the Met.


“In Port Chester at that time, my brothers and I weren’t all that well liked because we were different. We were Jewish,” says Laurie Konigsburg Todd, 60. “There were a lot of fights. We’d get followed and beaten up on the way home from school. People would call the house and harass us with prejudice and resentment. These experiences made us a very close family. My mother was more than just her writing, she was a generous, loving, creative person who kept our spirits up and held us to high standards.”
​

For children’s author Laura Marx Fitzgerald, 45, who set scenes in the Met in both of her middle-school novels, Under the Egg and The Gallery, the books are magical because they’re timeless. “The thing that’s unfathomable to me as a circa-2017 parent is that there are no Amber Alerts, no pictures on milk cartons, no media hysteria around two missing kids from Greenwich,” she says. “I guess we’re not supposed to think about the parents crazy with grief back in Connecticut.”


The Met is no longer lined with payphones, Manhattan automats closed long ago, and New York lunches cost more than mere pennies. But there’s still one place to see the museum of so many Konigsburg family Saturdays. The Hideaways, a forgotten 1973 film based on the book—starring Sally Prager as Claudia, Johnny Doran as Jamie, and Ingrid Bergman as the reclusive art lover with the bizarre filing system—was the first feature film ever shot inside the Met.

“We spent a lot of time there. I remember I got to lie in Queen Victoria’s bed. I loved every minute of it, I ate the Met up,” says Doran, 55, who now practices labor law in Phoenix. “We shot the fountain scene during museum hours. I was phenomenally embarrassed to be prancing around in my underwear.”


The film received mixed reviews in the 1970s, but for a modern viewer, it’s a nifty time capsule. And the book continues to inspire writers, artists, and at least one renowned filmmaker. In the director’s commentary for The Royal Tenenbaums DVD, Wes Anderson says the book inspired him to construct a mini-museum in a bank for Margot and Richie to “run away to.”


To this day, visitors to the Metropolitan still ask to trace Claudia and Jamie’s steps. The museum held a memorial service for Konigsburg when she died at age 83 in April 2013, and last August, the Met put out a video tour called “Can We Talk About the Mixed-Up Files and the Met?”
​

In celebration of the book’s golden benchmark, the Metropolitan Museum will host special Art Trek family tours July 13 and 15. Museumgoers can see a number of exhibits mentioned in the book, like the mummy and the bronze cat in the Egyptian wing.


Sadly, a few of the book’s signature settings are no more. The bed where the kids slept—described by Claudia as the scene of the alleged murder of Amy Robsart in 1560—was dismantled years ago, and the Fountain of Muses where the kids bathed now resides at Brookgreen Gardens in Murrells Inlet, South Carolina. But for the book’s devoted fans, the museum will always be Claudia and Jamie’s special place—and the spiritual home of anyone in search of art, meaning, and some spare pocket change. 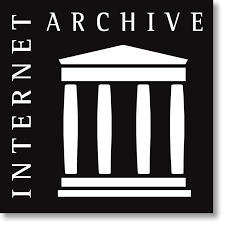